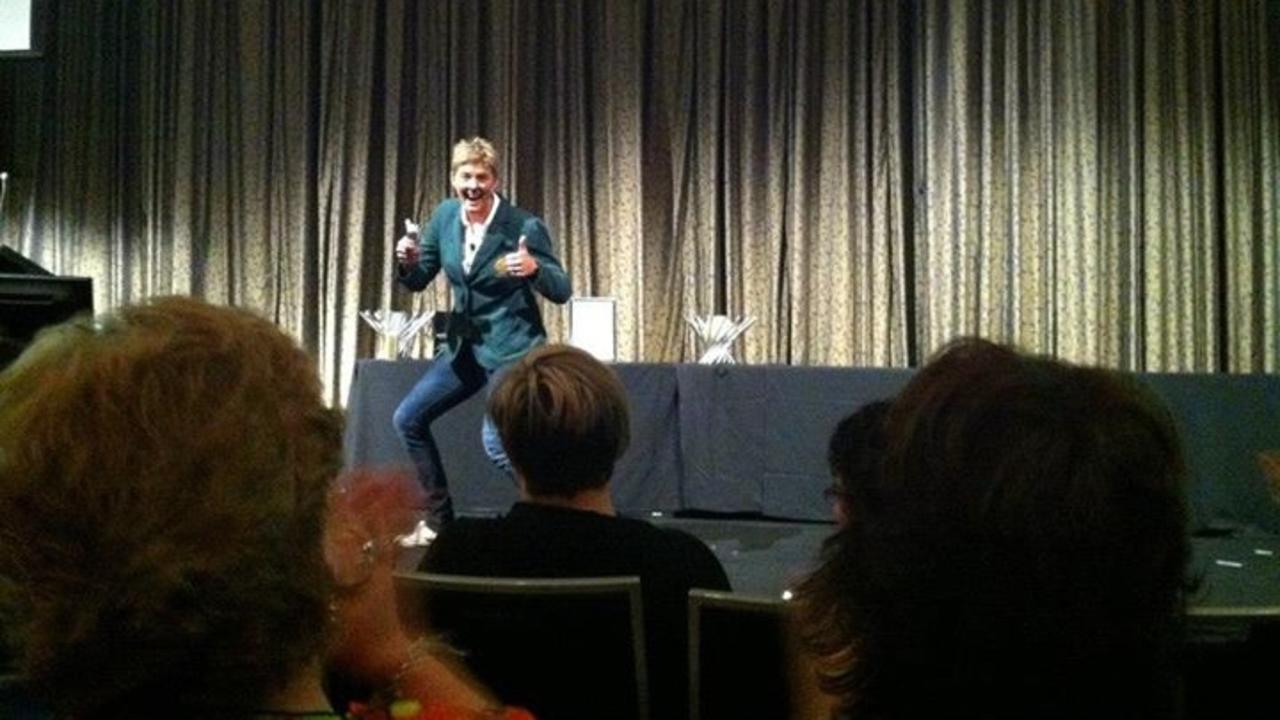 In this candid interview, Nat Cook talks about just what it’s like to speak in front of 10,000 people and why she has no time for fear.

From her two way relationship with the audiences and the way she differs from other athlete speakers, Nat cook shares the parallels and contrasts between life on the stage and on the sand and just exactly why her motivational speaker appearances are the perfect platform to share her message for school kids, those in the corporate world and many more.

Q: Looking back 2 years ago, did you ever think you would be on a stage speaking to 10,000 people?

Nat Cook: “Probably not 20 years ago but I’ve been speaking publicly now for 15 years so I knew that the audiences would get larger. And I’ve spoken to five and siz thousand people so I knew the audience I spoke to would probably keep growing and I will keep growing keep with them. Who knows what’s next. Maybe 20,000 or thirty thousand people in a baseball stadium. I feel like a rock star!”

Q. One the occasion where you before spoke of 10,000 people, what was the one thing that was going through your mind before going on stage?

Nat Cook: “Don’t stuff it up! (laughs)… It’s not usually my character to think like that but what had happened was I was in a superhero suit and I came on stage via a lift, with smoke and the superman theme song – and my cape flapping in the wind.”

“I was down below the stage, waiting for the cue but everything was going wrong. The microphone battery was flat. The presenter clicker thing that changes the slides wasn’t working, the volleyball that I was meant to have was missing. There were four or five people back stage running around and I was like ‘get me my ball, get me my ball’”

“Normally I’m quite calm and the first couple of lines are planned – cause once I get those out, the nerves can then settle. I literally caught the ball, the platform started to rise and I thought, ‘Don’t stuff this up!’”

Q. Is there something that you personally do to help with facing such large crowds? There’s a common scenario that everyone imagines everyone naked? Do you have anything like that?

Nat Cook: “I tend to pace like a tiger. With a posture that’s going to pounce on something! I might use what the speaker said before me and make it a transition as the first couple of lines to ease into it. So (before going on stage) I’m pacing and waiting to hear that something which will give me a transition. I feel a little bit like I’m listening to the ‘eye of the tiger.’ People don’t want to get in my way when pacing!”

Nat Cook: “I guess when I wanted to become an Olympian I was eight years old. The dream was to be the best in the world in my sport, which was swimming at the time. It was inspired by Lisa Curry’s freestyle in the 1982 Commonwealth Games, so I thought, “I could do that… I want to do that.” I didn’t know how, I didn’t know what sport – but that started the journey.”

“I guess a catalyst for me wanting to speak more publicly was when I went to my first Olympics in 1996 and came third I would get the same questions over and over and I thought ‘I have to answer everyone’s questions one at a time’ I guess that was when I asked myself how I could get on stage and answer many at a time.”

“When you win an Olympic Medal in your home country, more of the population knows who you are and you get even more questions. So speaking to 10,000 people has been great! I can address all at once and I don’t have to answer private messages on Facebook – all of the same question!”

Q. How do you get your audience involved and engaged in your motivational speaking sessions? You are very animated – are there any other techniques that you use?

Nat Cook: “It’s my purpose as a speaker to inspire, motivate and encourage people to live their dreams and be courageous to take that next step. That came because when I was a child athlete, and going to luncheons where there were professional athletes, but a lot of them were really boring. I said to myself – ‘If you ever get on stage you can not leave the room with one person thinking you are boring’ I can’t remember who it was – and if I knew I probably shouldn’t say anyway! I learned what to do, through what I knew I didn’t want to do!”

“A lot of the techniques I use are not rocket science, it’s just asking questions and allowing the audience to answer. Some speakers ask questions of the audience, but answer it for them or don’t allow the space for the audience to reply. Sometimes I sit with my audience silent for 20 seconds cause no one is brave to say something. I get them up doing activities, and games. It’s not just a lecture.”

“I also use props to stay engaged, from a cape an easy button, and volleyballs. I also have giveaways and everyone is jumping up out of their chairs. Props are very important.”

Q: Why are corporate clients embracing your services for their business teams? What type of advice do you give people working in teams to get results?

Nat Cook: “The corporate audience is an interesting one since there are not many female speakers. The men like that I can talk eye to eye with them. From beach volleyball, bikinis…I don’t mind a bit of banter and heckling from the stage depending on the audience. They really like the candid and no BS approach I think.  I share my stories, but not too many. The purpose of my presentation is to have them think that they can do it too. Whatever that may be.”

“For corporate groups I give a presentation called ‘What’s Your Gold Medal’ and we relate what it means in their life to be excellent. Whether related to their job, their career or in their personal lives. We workshop through how to overcome fear, improve communication and how to keep yourself motivated over the long term. It’s about what you can do when you’re feeling low. Corporates love it because it’s not too serious, but something they can apply to their jobs and own lives.”

Q: Are there any parallels between a live speaking performance and a volleyball game? How do you pump yourself up mentally and prepare to go on show?

Nat Cook:  “They are a bit different cause when I speak I’m in 100 per cent control. When I play volleyball I’ve got an opposition, referee, wind and factors that are out of my control. For a volleyball game you have to physically prepare and get your body ready

The mental preparation is probably similar, and to be able to deliver when the lift rises, or they announce your name… You can’t be on the toilet or talking to someone! That’s how the training on an Olympic athlete helped me as a speaker, cause when the whistle blows you’re on. So it’s the same thing on the stage.”