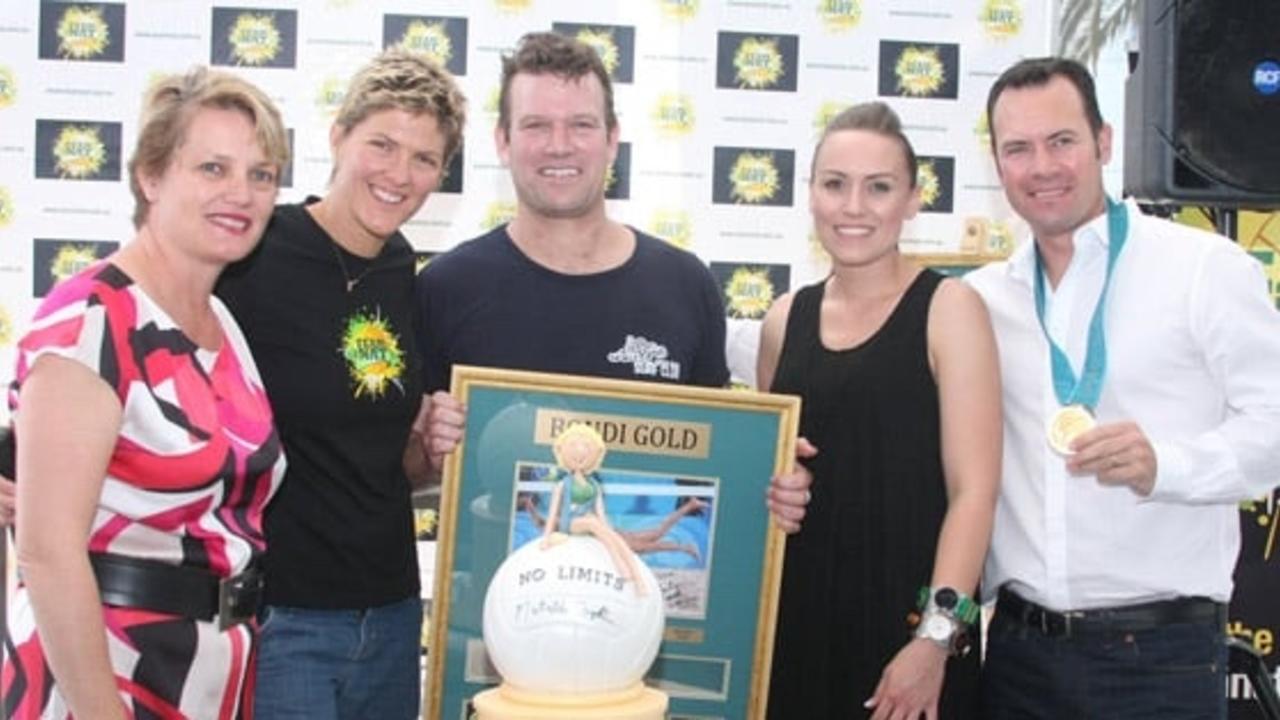 It was as much about the future as it was about a journey back through the sands of time.

The journey that began in Townsville for one of Australia’s Olympic greats, Natalie Cook, that has taken her to the last four Olympic Games in Atlanta, Sydney, Athens and Beijing.

And with the power of Team Nat will hopefully get her to a record fifth Summer Olympics in London – territory where no other Australian woman has been.

Tomorrow marks the 10th anniversary of one of the golden moments of the Sydney 2000 Olympic Games – the day Bondi Beach exploded into a sea of green and gold – the day Cook and partner Kerri Pottharst created their own slice of Olympic history.

John Fogarty, the man behind the microphone on Bondi Beach a decade ago, hosted a 10 year celebration at Brisbane’s South bank Surf Club today, just like he did on September 25, in the year 2000.

Cook was right alongside him to re-call the moment that shot her and Pottharst into Olympic history and also to launch a legacy for beach volleyball and women in sport.

It was fitting that the Queensland Minister for Women and Acting Minister for Sport Karen Struthers was there to formalise the celebration as was Australian sport’s poet laureate Rupert McCall who penned the words of “Dream of the Sand Warrior” – delivered with all the presence and passion that makes him so special.

The Team from Limetree Events played the Channel Seven news story that led the news around the nation ten years ago – news that Cook and Pottharst had won gold on Bondi Beach – a perfect key for Fogarty to chime in and recall the magic of that day.

“One of the coaches asked me the night before not to hype up the crowd too much – he didn’t want Cook and Pottharst to get overawed by the occasion,” recalled Fogarty as he again introduced one of Queensland’s favourite sporting daughters to a crowd of  50 of her keenest supporters, family and friends.

But cometh the hour, cometh the Australian girls with destiny at the finger tips.

“I remember standing, waiting to be introduced and the adrenalin was pumping, 10,000 people were packed into the grandstands, the place was about to explode,” said Cook.

“I had Rocky music pumping through my headphones and it felt like I was in Philadelphia (in Rock Balboa’s shoes) when they introduced us – I could not stop my legs from shaking.”

But after a spine-tingling two-sets-to-love win over Brazilian hot-shots Adriana Behar and Shelda Bede and with a crowd revved up by the great Dawn Fraser, it was Cook and Pottharst’s time to shine – one moment in time that changed their lives forever.

Cook recalled how she and Pottharst had set it up for Cathy Freeman’s gold medal win that night at the Olympic Stadium.

“Ours was the 99th Australian gold medal, so Catherine has plenty to thank us for. There is no doubt that Kerri and I sky-rocketed her to stardom,” said Cook with a wry smile.

“We were regarded as the best athletes on the planet for about four hours.”

Now 10 years on and Natalie Cook is still chasing her dreams and will mount a challenge for a record fifth Olympic Games in London.

But to help her along the way Cook has launched “Team Nat” – a team of professionals, supporters and family who will ensure she has every chance of getting there and ensuring she leaves a worthwhile legacy along the way.

“It’s going to be a challenge (getting to London) probably my greatest challenge – the players of today are younger, fitter and faster and that’s why I have formed Team Nat to help me along the way, but we are going to try and change people’s lives,” said Cook.

“We want to try and make a difference with our charity work and encourage health and fitness through beach volleyball . If we want to live long lives then we have to be fit and healthy. That’s what we’re about.”

Cook, through her Sandstorm Beach Volleyball business will also be the face of Solar Power Options who will launch into the Queensland Market on October 1.

Solar Power Options Director John Simpson said he was delighted to have the “perfect partnership” with Natalie Cook.

“Solar Power Options can’t believe we have managed to stumble across someone like Natalie who is the perfect fit for us,” said Simpson.

Natalie Cook, the perfect ambassador for everything young Australians should stand for and aspire to – the power partner in any team.