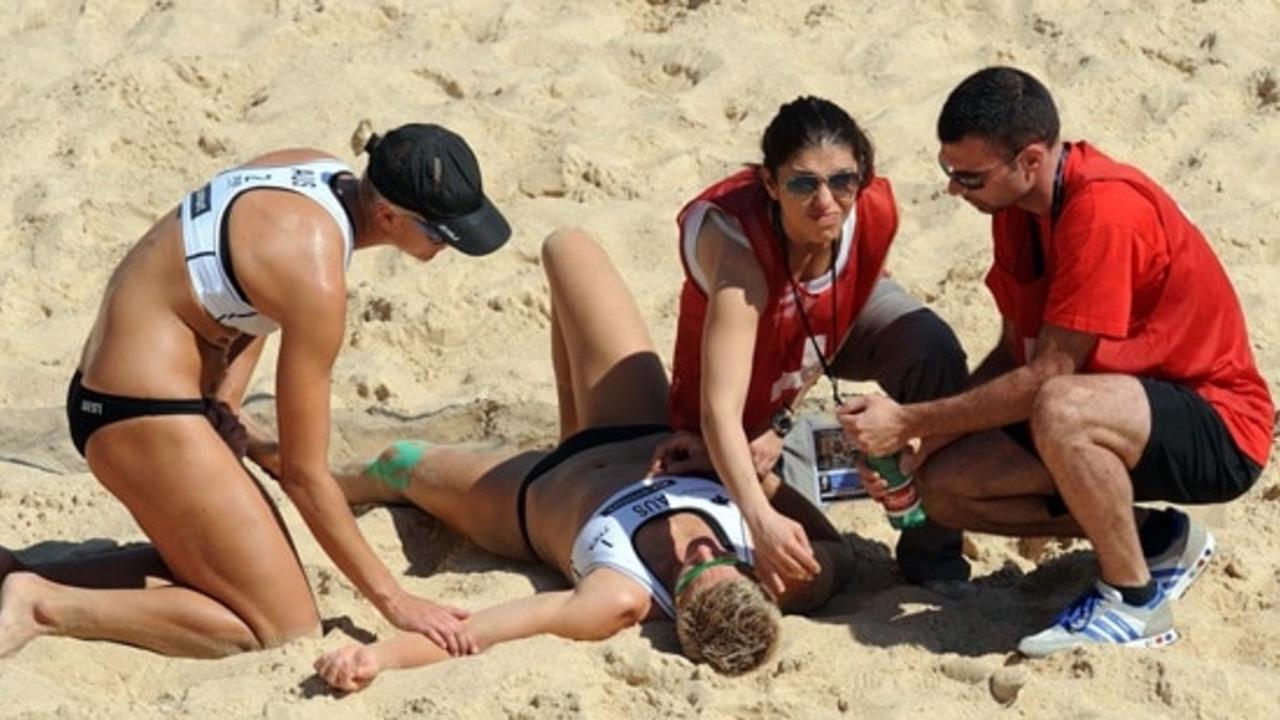 I’d come a long way since Atlanta, but I was still looking for inspiration all the time. Fortunately, there was no shortage of it in Sydney. The deeds of Kieren Perkins, Cathy Freeman, Susie O’Neill and Ian Thorpe featured prominently. I watched the swimming on a night when we got into three finals and won three medals. Susie O’Neill won the 200m freestyle, which wasn’t even her pet event. I derived so much energy from participating in the crowd’s celebrations that night. I loved all the hype, and just couldn’t wait to get back out on the sand.

By the time our second-round match came along – against China – we had learned a lot. Because of the fourday break, we were bored, excited, eager and restless. On the day, I couldn’t stand waiting any longer (our game was at 5:15 p.m.) and headed to the Bondi stadium early to soak up more of the atmosphere and imagine myself out there against the Chinese.

When we finally got onto the court, we were a new team. We still had a few nerves as the crowd went ballistic, but we reminded ourselves that it was all about doing it anyway, nerves or no nerves. And we did it. Kerri’s serve was right on the money and I felt I sided out well. We won the match 15–2. After the match, the crowd seemed totally obsessed – I felt like a rock star! It was a sensation I’ll never forget. Dawn Fraser and I hugged. I asked her whether it gets better than this when you win gold. She smiled and said “It gets better! You’ll be so high for the rest of your life, and you’ll never come down”.

23 September was the big day. We had two matches standing between us and the gold medal game, and they were to be held on the same day! We had to play like there was no tomorrow.We watched the Aussie team of Tania Gooley and Pauline Manser lose to Adriana and Shelda, the team from Brazil that we expected to play in the final. The Aussies finished the tournament in a creditable fifth place. Our favourite Yanks, Jenny and Annette, suffered a shock 15–9 loss to Japan. I think they will feel that loss for a long time to come.

Anna and Lara, our Italian opponents in the first match, were finely-tuned, but we started so strongly that we accelerated away from them to a 12–1 lead. We seemed to be doing everything right. They are a tough team, yet we were dominating them. Then something happened. It all went pear shaped. For some reason, we stopped and subconsciously questioned ourselves: why are we winning so easily? It was a real lesson, and I’m glad we learned it quickly before we lost the match. They fought back to 12–10, and showed us the extent to which volleyball is a game of momentum. We had that momentum going our way, and somehow we had forfeited it. As is typical with the game, the mentum then swung in their favour. In fact, it was more like an avalanche. We were suddenly struggling and had to quickly find a way to stop it. It caused a bit of panic in our ranks.

“When I don’t know whether to fight or not, I always fight.” – Nelson

The Italians are a great team. They had no intention of giving in. We dug our heels in, maintained our belief, and weathered yet another a storm, one that we probably needed to have. We finally won 15–12, and were happy to wrap it up and get off the sand to re-group. It was good to learn the lesson against them, rather than against the Brazilians. From now on, we were going to finish strongly, and not give the opposition one inch.

We had to prepare for the next match. It was difficult to prepare mentally, because we didn’t know who it would be. The Brazilian duo Sandra and Adriana ended up defeating the American team of Holly McPeak and Misty May – a minor upset. Then Adriana and Shelda, the other Brazilians, defeated Japan in the first semi.

Meanwhile, I raced back to the Swiss Grand Hotel, opposite the stadium on Bondi, to have Marcia fix up a few issues as well as receive some chiropractic work from Howard, another one of my saviours. I had built up our forthcoming match – the semi-final – to be the big hurdle. It was the equivalent of that match in Atlanta, and I had, spent much of the past four years working out what had gone wrong there. This was the bronze-medal match, and I had to get past it. Adriana Samuel, one half of our forthcoming opposition team, had faced us over the net that afternoon in Atlanta. The other member was Sandra Pires, who won gold in Atlanta. But how different Kerri and I were now! It was, in our minds, like a gold-medal match. We knew that if we got over this hurdle, we could do anything. Their team was made up of a silver medallist and a gold medallist. They’d experienced it all. They knew what it took to win.

When Marcia worked on me as we waited she helped me break down the final emotional hurdles I still had. It was a powerful, liberating feeling. While a few new butterflies were fluttering around in my stomach, I entered the stadium that afternoon determined and certain. Even writing about it now, my heart is racing. But I was happy with the nerves. I carried them without obsessing about them. As we came in, the roar from the crowd was deafening. We had never experienced anything like it, and we knew the Brazilians hadn’t either!

In our minds, it was our moment. When we looked at them from the other side of the net, we said to them (in our heads) “There’s no way you’re going to deprive us of our dream. We want that gold medal. This time it’s your turn”. We again looked at them from the top down, not the bottom up, as it has proved to be such a powerful tool for us. Sandra came out ablaze. She served the ball down Kerri’s line. Ace. Down the middle of us. Ace. The next one was unreturnable. It hit the net, hit me on the shoulder and went out. Three–zero to them, after two minutes! I remember walking back to the reception position, looking down, then up to the heavens with a smile, and thinking “This is going to be a long day”. That alone revealed something to me about the extent of my change. In Atlanta, I would have spiralled downward. I would have looked at the ground and not looked up again, and thought, “There’s no way we’re going to win”. In Sydney a ‘long day’ was nothing. It just meant that a long day was what it was going to take to win. This time, whether we were winning or losing, we had to act as though we were winning. Fake it until you make it.

How valuable now were the lessons I learned firewalking. Back then I stood in front of a path of fire and thought it would be impossible. Now I stood in front of the Brazilians and knew that it was not. The ability to tap back into that firewalking experience was the most valuable resource I had—I had experienced Natalie Cook doing something she thought was impossible. I now had a reference for that; a precedent that no one could take from me.

Kerri and I stuck to our game plan. Everything we did was directed towards finding a way to win and, what’s more, we were enjoying the challenge. You could liken it to magic, akin to suddenly entering another dimension, but really it’s just a coming together of attitude, preparation, poise and skill. Because we held our attitude, and never entertained the concept of losing—with all the emotional baggage that comes with it—we suddenly found ourselves in that dimension. It was a What is the Matrix?” experience. Suddenly we seemed to just be there, not because we sat back trying to comprehend it all, but because we kept seeing things a certain way, acting as though it was our reality. And so the reality in front of us fell away; changed into something else. Before we knew it we had won the match 15–6! We knew that our game was right where it needed to be.

Dawn Fraser capped it all off for us when she redefined the reality of the earlier match against Italy. She said that the reason fear crept in is that we had stopped enjoying ourselves. That made perfect sense. If anything is diametrically opposed to fun, it’s got to be fear! What better way to block fear than to replace it with fun?